Tariffs and trade wars, some comments

We are having an informal Civil Society Institute discussion on the tariffs and trade war issue this week, so I  thought I would do a little round-up.

My friend Tom Prusa summarizes some of the basics for a New Jersey television program: “Are people going to lose jobs? You cannot have the type of protection that are being announced and now being implemented without loss of jobs. This is almost unprecedented, the level of tariffs that not just the United States, but other countries are currently now ready to apply.”

Tom may have overlooked one job creation bright spot: “As of Thursday afternoon, the department had received more than 10,000 applications to exclude certain products from the tariffs. Earlier this month, a Commerce spokesperson told Marketplace it has expanded its staff from six people to 19 to process the applications. Officials did not respond to a request for more details about the qualifications of those staffers.”

The irony should not be lost: the party of deregulation is creating a regulatory tariff structure where the often arbitrary decisions of bureaucrats makes private enterprise more or less profitable. Reason.com is all over that aspect of the trade wars.

Economists predict at their peril: June 1: ““I do think this throws a wrench into the NAFTA negotiations and find it very unlikely that they’re going to conclude positively any time soon,” said Chad Bown, a senior fellow at the Peterson Institute for International Economics.” October 1: New trade agreement announced.

Much discussion about soybeans since they matter for politics (because small-population farm states have so much overrepresentation in the Senate): 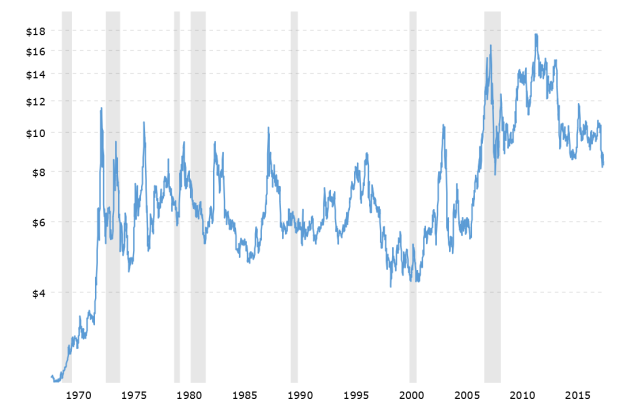 As can see, despite recent falls in prices, soybean prices are still at hostoric highs. “Don’t cry for me soybean farmers…”