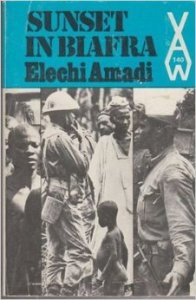 He is such a good writer, his omissions can be forgiven, maybe?  I loved reading the book. It is short, sentences are well-crafted, anecdotes from his experiences told with gusto.  He experienced awful stuff.  But the omissions… I loved this excellent analysis by Richard Shain comparing Sunset in Biafra (published in 173 shortly after the war) with Ken Saro-Wiwa Sozaboy (which I shall have to order from the library, sounds like a precursor to Allah N’est Pas Obligé that I was unaware of).  Shain has interesting take on the final sentence, “I picked up my father the next day just four miles from home. Clad in a tattered ancient black overcoat, and with a white beard, he was pushing his bicycle along with steps made remarkably steady by his proximity to his ancestral home. He did not weep as he hugged me, but I knew he felt more than everybody else.”  But I interpreted it as typical Amadi: he loves to have a last sentence encapsulate the whole novel.  The Biafra war, from Amadi’s experience, is almost unintelligible; there is nothing to say about it, about how the world was upended in a non-sensical way.  For people like Amadi’s father, there were no words for the folly, just feeling.

Economist at Santa Clara University and Director of Friends of African Village Libraries.
View all posts by mkevane →
This entry was posted in Book and film reviews. Bookmark the permalink.
Slate Afrique
EverythinLiterature
Accra books and things