In all jurisdictions, banks, motivated by deposit withdrawal concerns, have been reluctant to pass negative rates through to retail depositors. Partly to limit the resulting impact on their net interest margins, some central banks introduced exemption thresholds for negative remuneration, thereby limiting banks’ average cost of holding central bank liabilities (Graph II.A, left-hand panel). Initially, there was also uncertainty as to how banks would treat their “wholesale” depositors, but some banks are now passing on the costs in the form of negative wholesale deposit rates. In some cases, banks have used exemption thresholds akin to those that central banks have applied to their reserves. In Switzerland, banks adjusted selected lending rates, notably mortgage rates, upwards, even as the policy rate was lowered to -75 bp (Graph II.A, centre panel). The Swiss experience suggests that banks’ ability to cope with the relatively high cost of retail deposit funding (Graph II.A, right-hand panel) without increasing lending rates will affect the technical room to keep interest rates in negative territory. This ability depends, among other factors, on the degree of competition in the banking sector and the share of retail deposits in banks’ funding mix (Chapter VI). In Denmark, where mortgage loans are mainly financed with pass-through bonds rather than deposits, mortgage rates fell alongside money market rates, although mortgage markups edged up throughout 2015 (Graph II.A, centre panel). Yet, as most Danish mortgages have adjustable rates, there was uncertainty about the tax treatment and the mechanics of dealing with negative mortgage bond coupons. Also, some investors, notably insurers, were unwilling or unable to buy negative cash flow securities, creating a demand for instruments with interest payments floored at zero. So far, negative policy rates have not led to an abnormal jump in the demand for cash. However, anecdotal evidence suggests that both financial and non-financial firms have started adapting to the new environment and are seeking to adopt innovations that would reduce the costs associated with physical currency use. 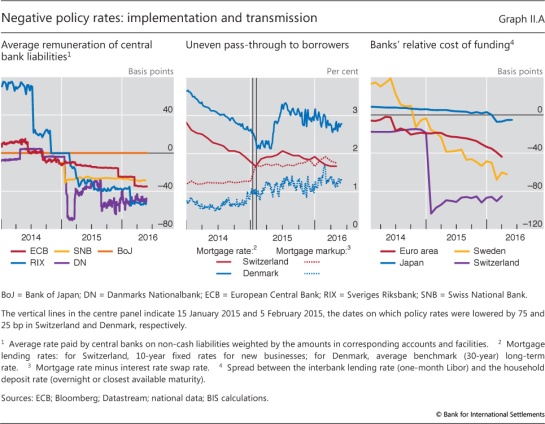 Economist at Santa Clara University and Director of Friends of African Village Libraries.
View all posts by mkevane →
This entry was posted in Burkina Faso. Bookmark the permalink.
Slate Afrique
EverythinLiterature
Accra books and things