Why are Supreme Court justices unable to do basic anthropology?

“The court invalidates the marriage laws of more than half the states and orders the transformation of a social institution that has formed the basis of human society for millennia, for the Kalahari Bushmen and the Han Chinese, the Carthaginians and the Aztecs,” he [Roberts] wrote. “Just who do we think we are?”

Leslie and I always remember a wonderful ethnography Nisa, by Marjorie Shostak, from the Kalahari, where women routinely called each other “Big Vagina!”  I wonder if Roberts also likes that social grace?  If Roberts did read and understand Nisa, a standard introductory anthropology book, I do not see how he could have written that sentence.  More generally, citing anthropology and history, picking and choosing… well, one wonders who does he think he is, anyway? And he appears not to appreciate the irony that one could substitute slavery for marriage and the sentence would remain quite intact.  Well, who do we think we are?  Abraham Lincoln, is who we aspire to be.

Does an intelligent person, writing for the ages, write like Roberts?  I am sorry, but I am saddened to have such a person sitting on the Supreme Court.

His sentence about other cultures reminds me of a letter I wrote published in the Wall Street Journal (scroll down) almost 15 years ago: 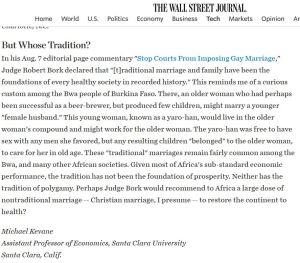 Economist at Santa Clara University and Director of Friends of African Village Libraries.
View all posts by mkevane →
This entry was posted in United States. Bookmark the permalink.
Slate Afrique
EverythinLiterature
Accra books and things